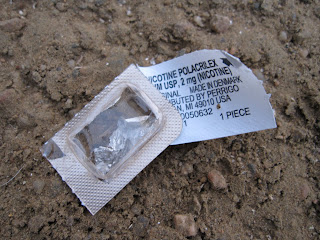 Anyone who has spent more than 30 seconds with me knows my disdain for littering in any form. I have a particularly venomous attitude toward those who toss cigarettes out the window because a) it appears these idiots feel that it isn’t littering, b) it is actually WORSE than littering in that it causes fires which endanger lives (human and critter) and property and c) is completely preventable since every goddamned car on the market comes with this crazy thing called an ash tray (or has “ashtray” as an option that one can add for a small sum of money).

Regardless, when some dipshit feels the need to throw their smokes out the window, I get infuriated. So much so that I almost got into a fistfight over it once. True story.

I was coming home from somewhere and forgot about the weekly jackass parade from Denver to the casinos in Black Hawk. So I was stuck in traffic… for a long time. So I am not a happy Stu to begin with then Señor Asshat in the car in front of me decides the dry grass to the right of his car is where cigarettes go. I laid on my horn and shouted at him to pick up his cigarette at which point f-bombs were hurled and fortunately for I don’t know who, the parking lot began to move and I was unable to do the horrible things that were coursing through my very imaginative mind. And to top it off, that car from which the butt was tossed was sporting a volunteer firefighter bumper sticker. I shit you not.

I have promised Rach I will no longer confront jackassery done in my direct line of sight but my blood still boils when I see people using our roadsides as their personal ashtrays.

So tonight, Rach found some litter in our driveway… tossed there, I’m sure, by one of the many douchenozzles who speed up and down our road on a regular basis (don’t get me started). Lo and behold the litter wasn’t a cigarette, but a nicotine gum package. I am not sure if this is a step in the right direction or not.

So apparently the Bush administration is trying to do an end-around on our forests in the waning days of their influence in order to open up our roadless wilderness to mining and drilling. Fellow Coloradoans, I IMPLORE you to go make your voices heard to stop this mad land grab by submitting your statement before October 24th.

Our forests thank you.

Our challenge for the future is that we realize we are very much a part of the earth’s ecosystem, and we must learn to respect and live according to the basic biological laws of nature. ~ Jim Fowler

This was a decent week of training. Not quite what I had planned but a lot of hard running. Which is good. I did just notice that a long post I created on Thursday somehow didn’t get published. Bummer. It was about a movie I saw on Wednesday night (Sharkwater) that documented the horrible treatment of sharks for the fin industry. Really revolting and one of those films that makes one really despise the human race and our propensity to feel that we can just dominate all other species without concern for their well-being or the impact of our actions. If you want to learn more about long-line fishing (bad), finning (also bad), check out savingsharks.com.

On that light note, here is a summary of my running adventures this week:

So for the week, I was off what I had hoped to achieve for distance but still had a solid week of hard training. I missed out on runs on Thursday and/or Friday due to work and weather and maybe a little bit of apathy, but that is all okay. I am thinking I may do the Denver marathon on October 19th as a warm-up for Vegas. Still noodling on that but I’ll let you know.

The most wasted of all days is one without laughter. ~ e e cummings

Tonight saw our first really hard frost of the season with sustained temps overnight in the mid=20s. We have had a few lighter frosts this season already but last night is the first night that we had cold enough temps (for long enough) to really hammer home that Fall is approaching.

At the risk of alerting the valley-dwelling leafers, the aspens are starting their yearly burst into full on color mode and should really get going in the next couple of weeks. Last year, I wanted to organize a run up on the Leadville course to enjoy one section in particular that is just packed with amazing aspen groves. We’ll see if that happens this year. Given racing schedules, weddings, lack of running fitness, and buddies in India, it may end up being a solo venture.

I have decided to only bore you once a week with running exploits (doing more of a weekly synopsis as opposed to the daily detailed update) so I’ll only mention my daily runs in passing with fuller reports coming at the end of the week. That being said, Caleb and I did a 20-miler yesterday on the Backroads course that was quite fun. Then I went to see Pineapple Express which had moments of goodness but overall was pretty much a trainwreck. Not on my recommended viewing list.

The birds (along with the bears) are going nuts right now and so I need to head to Boulder to get more food for the freeloaders. May check out Burn After Reading while we are down there. I’ll keep you posted.

Today’s homework: Register to vote if you haven’t done so already.