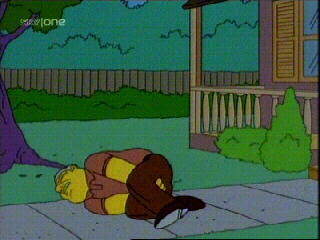 Aaagh! My groin!!! ~ George C. Scott (as impersonated by someone on the Simpsons)

Now that I have the formal bs out of the way, I would like to tell you about the last couple of days which notched 22 and 23 on the belt of the 08/09 season. Which reminds me… I need to purchase a belt notcher. And a belt, I suppose.

We got the serious posse together yesterday for Luke and Nichole’s triumphant return to the Basin. They were greeted by pretty chilly temps and funky snow conditions. Luke still skis like a champ but for once, I was able to out-pace him. Only because he is not acclimated, really… but I’ll take it however I can get it.

Pete, Edy and Caleb rounded out the crüe and we hooked up with Jodi for some nice, hard-charging laps off Pali. The Spine was flowing smoothly the first part of the day then got some nice blow-in later, which was pretty cool. The Rock Garden was skiing really well (as usual) and there were great turns to be found in the lower alleys. All around a great day.

I headed to the gym on the way home in a misguided attempt to get some miles under my belt. I lifted for a bit then did manage to run 1/16 of a mile. Not my best effort. My entire pelvic region is just completely messed up right now. Psoas muscles giving me a lot of trouble and now my groin muscles have decided to join the party. I suppose I should stop doing everything but it bugs me less skiing and I am feeling great otherwise so I’ll probably be an idiot and keep hammering. Yeah. Not much has changed when it comes to self-abuse dipshittery in the casa del stubert.

I did swim for a bit, which actually seemed to loosen things up. Then my left foot cramped up. Which is not on my list of recommended things to have happen in the deep end. I do like my new goggles, however; and even suggested to Rach that I wear them full-time. She did not give the thumbs-up on that idea.

So today we headed up to Eldora which lived up to its name admirably. It is a little-known fact that Native Americans coined the word “eldora” to mean “cold as hell and windy as all get out”. Most belive this was a reference to someone tribesman’s bitchy and flatulant aunt but the origin is a bit foggy. Wait, what? It doesn’t mean that? Well it should.

Caleb, Pete, Evelyn and I met early for a morning assault on the Rock and though it actually wasn’t that cold, it was blowing like crazy which made it feel about minus eleventy million degrees. Yes, Centigrade… duh. Salto was skiing really well though so we braved the conditions until around noon. We hooked up with Morgan about 11 so got to spend some time skiing with her, which is always a treat. I also found a sweet nook at the top of Salto in which to hide from the blasting wind. I did my best Totoro impression but I don’t think anyone got it but me. But as long as I am entertained, I’m happy.

I really, really need to get my office set up so maybe that will be today’s afternoon project. If you think of anything else that I could use as a distraction, please let me know.

Today, Caleb and I were going to meet at Eldora to make some turns. It has been really warm up here the last couple of days so we weren’t really expecting anything good but we were pretty psyched to get in a few hours of fun and/or games on the recently opened Westwall area.

I was actually on time for once and was about 3 miles south of Nederland when I came across a road closure. Bummer. I assumed that a tree had blown down across the Peak to Peak or something so I headed down to CR97 then up to Magnolia to try to circumvent the closure. Upon getting back on the P2P, I was quickly diverted again. Plus traffic was being allowed to move back on the P2P to the south, the very section I was not allowed to travel. Something was amiss…

So I made my way through Big Springs to Ned and then was turned around at the turn-off to Eldora. Apparently there had been some sort of incident and the area was to be closed for the day. Wondering what was going on, I headed back into Ned to see if I could find Caleb and when that was unsuccessful, bought some groceries and started asking about what was going on.

The details are coming in bit by bit but apparently an employee entered the Pump House at the ski area base, made some threatening proclamations, fatally shot the General Manager, Brian Mahon, then fled. He was pulled over about a mile south of Ned at which point he opened fire on the officer who returned fire. There may have been a second officer involved as well but the suspect was killed. [edit – Reports state now there was only one officer involved in the shooting.] What a total drag.

Rach got a message from Caleb where he mentioned the shooting so needless to say, she was a bit concerned. Cell coverage is crap up here too so there was no way for me to let her know I was okay. I have been following the story pretty closely but details are still a little sketchy. What a horrible way to end the year. My heart goes out to all those touched by this tragedy.

If everything seems under control, you’re not going fast enough. ~ Mario Andretti

Headed up to the Rock late morning today to get in a few turns. Hoping to build on the successes of yesterday. It was cold but relatively calm today but conditions were far worse than yesterday’s dreaminess.

I made a few runs back in Salto and was feeling fairly well… not as great as yesterday but definitely getting the flow of things and skiing relaxed. Pretty much what I need to be doing. On my third or fourth trip down through the glades, I stopped to help some poor monkey who was in WAY over his head retrieve his ski. This was shortly after watching him nearly take a header through the woods at an alarming rate of speed. Did I mention he was on one ski? Seems like I did. After he came to a stop, I skied down to him and gave him his missing stick, then made a couple of turns and proceeded to tweak my right knee a little. Nothing major but a definite set-back to my plans for world domination.

So now I am rockin’ the ice shuffle, vitamin I, Arnica (which Pete doesn’t believe in, kinda like gmail) and rest. We’ll see how it feels Wednesday but I definitely am looking out for Thursday when we are planning to shoot in Utah. I’ll keep you posted. Normally, I wouldn’t go around sniffing shoes, mine or anyone elses, but last year Dylan took a whiz in my bike shoes and well… it lingers. Whatchgonnado? This weekend, I logged some hours on the mountain bikes to give the shin a rest. Seems to have worked nicely. No problems either day which, as you can imagine, makes me pretty happy. The riding went pretty well too. I got soaked on Saturday but it was warm and there wasn’t any lightning so I stayed out. Hit up some old trails in the Ned/Eldora area and then explored some new ones on the way home. My bike was destroyed afterwards from all the mud but it cleaned up nicely. Today, Luke and I headed up to Eldora to suffer up the Caribou Flats climb on the singlespeeds. I wouldn’t really recommend this one unless you have the right gears. Both Luke and I are rocking pretty tall ratios so we ended up pushing a fair amount. Full-rigid is a little rough as well but sometimes you have to keep it really, really real. Old school. After a couple of missteps, we managed to find a kickass section of singletrack I had not ridden for many years and let me tell you, it was well worth it. Great ride. Here’s the full album.

Tomorrow I plan to do a whole lot of nuthin’. I have an appointment with Dr. Dave but will be taking the rest of the day off. I’m into my taper at this point and rest is going to be my primary focus over the next few weeks. I’ll roll out for a few runs here and there to test the leg, will do a few medium rides and take it easy until the race. I need to finalize my race plan for Megan, Nichole and Luke to review and get everything in order prior to the event. That is on this week’s agenda for sure. Today’s adventure began with a trip to the Vet. Sam, our wonderful Siamese kitty is sick. This is really horrible news after the loss of Oliver just a couple of weeks ago. We have pretty much ruled out the pet food problems that have been seen around the country but Sam is having the same problems as Oliver and this is not good news. She is back home now and resting.

Post Vet, I hooked up with Luke and Pete for some backcountry skiing. We opted out of another Chihuahua/Margories loop for a sojourn into the National Forest around Eldora. We were promptly kicked out of the Eldora lot and headed down to the Hessie Trailhead to try our luck skinning up the back way. After several false starts, we were on our way.

The skin took WAY longer than we hoped as we did a bunch of poking around to see if there was an easy way to ford South Boulder Creek which, being May 7, is roaring. No luck. So after bushwhacking back up to the main trail and getting a ton of practice donning and removing our skis, we finally made it to Lost Lake.

Conditions were a little sketchy so we opted out of starting our ski from the top of Left/Right Chutes and just launched out descent from the roll. Not a lot of vert but still good lines were lain. Lain? Sure, lain.

On the way out, Pete jacked his knee up which made for some interesting navigating. We decided to traverse over to Corona and jam straight back down to the car. Pete handled it all with good humor and Luke showed off his stream skiing and tree skiing skills on the way out when we crossed back over the creek – sans bridge. Needless to say, I am putting my boot drier to very good use.

I may still go out for a run later this evening but am looking forward to seeing Shirley at In Motion Rehabilitation (Luke, this may be the worst site I have ever seen. Think they’d trade us some bench time for a little help?) tomorrow and then going for a bike ride. Singlespeeders, start your engines for a 4:30 launch. Be there or be elsewhere.