Like Roy Cormier with the coconut lotion ~ Beastie Boys

I haven’t done much updating of late. Lots going on with my business as well as trying to appreciate some time off from more structured training. Instead of getting outside and pounding out the miles this winter, I have been focusing my efforts on more “season-friendly” fare this year and have been doing a lot more nordic skiing to stay active, promote a more balanced fitness approach, and give my mind/body a bit of a break after several years of pretty much non-stop, focused training. In a word, it has been good for me.

Not only am I coming around fitness-wise through some pretty consistent work on my skate skiing but I am getting more and more jazzed to ramp my running back up. Not just for racing (though I have some ideas about that) but to really plan out a few adventures for the coming season. I love road racing but REALLY miss trail adventures. Last year’s 4-pass loop got me thinking about other “epics” that I could plan and put together for the Spring/Summer of ’13 and I have a real desire to bang out a bunch of 14ers this summer as well. This will probably lead to a marked reduction in my ability to burn quality top-end speeds (which detracts from another, albeit dumber, goal of running a sub-5 mile) but I may see if I can achieve some balance this season and hone both my speed and longer-distance abilities. Not the best combo but I know that some other runners have managed to figure out how to put these two together so I may give it a whirl. I was able to get my top-end back in decent shape very quickly after Leadville in 2010 (e.g. this) so may take that approach and knock out some adventures this summer then leverage that strength and endurance fitness for a fast marathon in the fall. We’ll have to see.

So back to nordic skiing for now. After getting some tips from my buddy, Ben (local hard-man and LT100 top-15er), my ability to actually enjoy skate skiing improved markedly. Two tips: Focus on your timing/rhythm and point your outside hand in the direction of the turn on fast descents. It is interesting how something as specific and technical can actually have applications outside of its seemingly narrow focus. I have actually made some adjustments to my running form based on what I have learned skating. Two more weeks until Eldora closes up shop then the trails should start to open up. I am looking forward to logging some miles on my favorite patches of dirt but in the meantime, you can catch me working on my form, enjoying the much-needed snow, and getting even more psyched for the coming season. 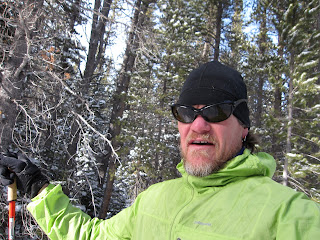 What do you mean you don’t have a quote? I’ve said a lot of funny stuff today. ~ Rach

Continued recovery. Still experiencing some glute trouble but overall, still running strongly. Despite a hectic week, I have managed to get out and about consistently and I have to say, it feels great.

Ran on the Creek Path again on Tuesday and not only got so excited to start my surges that I goofed up my schedule and came to the realization that I have a difficult time running slowly on the BCP. After a slightly clunky warm up, felt better and better through 3 surges then tweaked my foot a little somehow. I walked briefly which make it go back to normal for a bit until I started to run again. Pain, walk, repeat. The third time was the charm and I finished the run strongly.

Hit the gym late on Wednesday for a tempo run. Pressed for time, I started on the treadmill for 20 minutes of warm up at a 10:00 pace. Felt great and my heartrate was super low so I headed to the track for what ended up being 52 minutes of tempo. Started with 8s then gradually picked up the pace. I lost track of my laps but ended up in the 7-mile range for the tempo. Then I took off the shoes and did a cool-down mile barefoot for a total of 10 miles (estimated). Was really pleased with the results, frankly.

Today I mixed things up and went to Eldora for a short skate ski. It was really cold (6°F) and SUPER windy and with the combination of fresh snow, blow-in and the temps, I wasn’t quite as on it as last time I went up. Fun nonetheless and good to get out.

Vanity is the enemy of funny. ~ Rach

After Wednesday’s effort, things started to settle down a bit in the injury department but I didn’t feel 100% the rest of the week, that’s for sure. Still had some good runs and got in a bonus skate on Friday so I ended up with just shy of 50 miles for the week. Not too shabby all things considered.

Thursday, I just did a quick, recovery run and felt decent. Ran in Boulder on the Creek Path and actually logged some quick splits given the continued crankiness I was experiencing in my right leg. Far less uncomfortable than the previous day but still there a bit for sure. Felt like I was constantly adjusting my gait to try to smooth things out. Overall, however, I was super relaxed and spun easy mid-8s without feeling like I was pushing things at all.

On Friday, I normally take the day off to rest but had to get outside to clear my head so went up to Eldora for a quick skate ski. My second day out on the twigs was MUCH better than my first. I am sure I still resemble a spastic turtle or something but I was actually able to glide uphill and felt like I improved a ton from my first effort. Hopefully it just keeps getting better.

Saturday, Rach and I went to see Les Contes d’Hoffman, presented by The Met. Amazing performance by an outstanding cast. Really enjoyed it. I even had time to jam up to the Rec Center and get in a quick run. Still felt some residual effects of the injury but much better. Just did 30 minutes of warm up at a 10:00 pace then 5, super easy 1×1 surges. Relaxed and fluid.

I got up early on Sunday and headed back down to Boulder for the weekly big run. Met with the group after spinning around on my own for about a mile then we headed out on a Niwot loop. Super leisurely pace for the first few miles then the group split and we started rolling 9s. I felt okay, never completely great and felt that my heartrate was up a bit from the week before (though at the end of the day, it wasn’t up by much, really). I was starting to feel it by mile 15 or so but had stretches of decent recovery/feeling okay in the last 7. With 2 to go, we were really moving (mid 8s) as this seemed to be the only way I felt okay. We got stopped by a light with about 1 to go and that pretty much ended it for me. I pretty much just noodled it in and actually walked the last 1/2  mile or so. Was just a bit done by that point, which, given the week, was not too demoralizing. Ended up with about .25 miles less distance than last week with a longer warm up and about 10 less minutes so all in all, I am pretty happy with it.

Today, I planned to go ski with my buddy, Caleb but had problems sleeping due to an achy knee so I decided that it would be best to just rest it today. I have done something 6 out of the last 7 days while recovering from an injury so I decided to be smart for a change and take the day off to try to recover a bit. I ended up with over 50 miles for the second week in a row, which, at this time of the year, is not too shabby.

Deep e deep dow do dee do do ~ Hamster Dance

Words can not really describe how nice it was to get out of the hamster maze yesterday. The temps here have been incredibly low of late and yesterday, they finally started to break from their single-digit (or lower) rut and climbed into the mid teens. It wouldn’t have mattered as I was bound and determined to get outside for some fun in the sun but seeing 12° when I pulled on the skate boots at the base of Eldora lifted my spirits for sure. More on that in a moment.

I have been stuck in the gym but have been making good use of my time and spinning some solid efforts. On Tuesday, I warmed up for 30 minutes then did 10, 1×1 surges at an increasing pace. Felt a bit woozy to start after less-than-ideal nutrition for the day and a massage but a gel picked me up and I was able to finish the full workout with gusto. Then I did a circuit of upper body weights and called it an evening.

Wednesday featured the addition of wind to the frigid temps as well as client meetings in Denver so it was back to the gym for a tempo workout. I tried to mix things up a bit to fight off the boredom associated with running on the ‘mill and track and ended up having a great run. Started on the treadmill with 30 minutes at a 10-minute pace, then went into my tempo slowly with 2 miles at 8:00, and 1 mile at 7:30. Then I moved to the track for 35 minutes at 7:00 then cooled down for 10 minutes at 10:00 on the treadmill for a total of 1:37 and 12 miles. Felt great but I was definitely getting pretty sick of running in circles by the end.

So that brings us back to Thursday. This was the first time I have skated since college (about 18 years) and I was definitely rusty. The wind was howling at the Rock but the nordic center there is hidden in the trees so once one gets going it isn’t that big of a deal. I fell pretty much immediately (whoa those skis are skinny!), got up, fell again and broke the grip on my pole. Hmmm. Not an auspicious start but I was committed so I went in and got some rental poles and got back after it.

“Graceful” is not the adjective one would use to describe my form but in the next hour or so, I managed to quickly improve to the point where I was able to glide some uphill and didn’t eat it any more, which was nice. Just worked on staying upright, getting used to standing up on toothpicks and trying to not look like a total kook. Two out of three ain’t bad, I suppose. Had a lot of fun and am excited to get my pole fixed so I can get back after it.

Looking back at the past few weeks, I definitely have had some days that were better than others. All were productive, however and, though occasionally suffering, really have enjoyed myself. Some days feel a bit more like suffering than others but really, post run or ski, I feel way better about well… everything. That’s why I do it and why I encourage others to just go spend a little time getting the old heart pumping. It soothes what ails ya.