Like Roy Cormier with the coconut lotion ~ Beastie Boys

I haven’t done much updating of late. Lots going on with my business as well as trying to appreciate some time off from more structured training. Instead of getting outside and pounding out the miles this winter, I have been focusing my efforts on more “season-friendly” fare this year and have been doing a lot more nordic skiing to stay active, promote a more balanced fitness approach, and give my mind/body a bit of a break after several years of pretty much non-stop, focused training. In a word, it has been good for me.

Not only am I coming around fitness-wise through some pretty consistent work on my skate skiing but I am getting more and more jazzed to ramp my running back up. Not just for racing (though I have some ideas about that) but to really plan out a few adventures for the coming season. I love road racing but REALLY miss trail adventures. Last year’s 4-pass loop got me thinking about other “epics” that I could plan and put together for the Spring/Summer of ’13 and I have a real desire to bang out a bunch of 14ers this summer as well. This will probably lead to a marked reduction in my ability to burn quality top-end speeds (which detracts from another, albeit dumber, goal of running a sub-5 mile) but I may see if I can achieve some balance this season and hone both my speed and longer-distance abilities. Not the best combo but I know that some other runners have managed to figure out how to put these two together so I may give it a whirl. I was able to get my top-end back in decent shape very quickly after Leadville in 2010 (e.g. this) so may take that approach and knock out some adventures this summer then leverage that strength and endurance fitness for a fast marathon in the fall. We’ll have to see.

So back to nordic skiing for now. After getting some tips from my buddy, Ben (local hard-man and LT100 top-15er), my ability to actually enjoy skate skiing improved markedly. Two tips: Focus on your timing/rhythm and point your outside hand in the direction of the turn on fast descents. It is interesting how something as specific and technical can actually have applications outside of its seemingly narrow focus. I have actually made some adjustments to my running form based on what I have learned skating. Two more weeks until Eldora closes up shop then the trails should start to open up. I am looking forward to logging some miles on my favorite patches of dirt but in the meantime, you can catch me working on my form, enjoying the much-needed snow, and getting even more psyched for the coming season.

Been really just recuperating over the past few weeks and started running some longer, more focused efforts in the last week or so. One mistake I made after the Denver Marathon last fall was to jump back into hard training too early which resulted in having to take some extra down-time to get my legs back. Post-Boston, though itchy to get going again, I resolved to not make that same mistake.

I have been following Mark Plaatjes’ orders and took two weeks REALLY slowly then added a regular regimen of somewhat reduced duration workouts over the last couple of weeks. This past week featured an increase in intensity with mile repeats on Saturday followed by what turned out to be a good 1, 2, 3, 3, 2, 1, 1, 2, 3 pyramid workout on Tuesday. I felt a bit slow but my spits proved otherwise. I backed off going purely by pace on this one and just tried to hang with some of the faster runners in the group. They typically would gap me after about 15-30-seconds of each interval then I would maintain that distance through the remainder. My last set was still strong where others were fading so I am marking it up in the “plus” column for the overall effort.

Wednesday’s run was a good one as well. Tried to rally the #DenverLunchRun crew but people were either tapering for this weekend’s Colfax Marathon, stuck in meetings or too ill to get out in cold, rainy conditions. Twenty minutes before I was scheduled to head out, it was pouring rain and high 30° temps. Not fun weather in which to start a run but by go-time, the rain had tapered off a bit. I definitely came back wet but at least I was able to get my core temp up before getting too soaked. Stayed warm throughout the run, Cherry Creek Path was a ghost town and it felt good to be out braving the conditions. Some training is more mental than physical and this run definitely counted in that arena.

I signed up for the Bolder Boulder race on Memorial Day. It will be good to get in a short effort with a lot of people. Hoping to use the race to hone some skills which I currently am lacking and get some more experience with race day focus and big crowd racing. The course is difficult and I am not sure if I will be rested fully to run a PR or not but my big plan is to not get too frustrated in the early going, work the course and see what kind of finish I can put together. Still targeting my schedule for June and July in prep for the SFO Marathon and am excited to get rolling on some longer runs with faster finishes in the weeks to come. 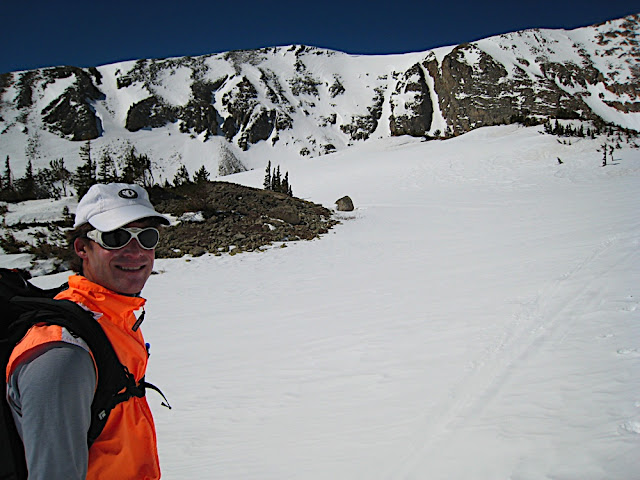 Ben in the backcountry above Brainard. Badass.

Post L.A. things didn’t really improve for me fitness-wise. I did those two 9-mile runs and felt pretty crappy then followed up a week later with a fun (but somewhat frustrating) run on the 3rd. Bob and I started from his place in Boulder, ran up Flagstaff and back down to Boulder Canyon (down the back side of Flag). I really enjoy this run most of the time. The section from the top of Flag down to the canyon is frequently filled with interesting fauna and this time was no exception. Bob and I saw 9 turkey (turkeys?) in a group on the side of the trail. We stopped to watch them for a bit and then continued down the hill. We did spot what appeared to be big kitty tracks and then were pleased to be able to confirm that yes, bears do in fact shit in the woods.

While heading back down Boulder Canyon, I started to fade a bit and really started to suffer going back up and over the shoulder of Flagstaff. Just feeling really weak, somewhat nauseated, etc. We made it back to Bob’s in under 3 hours (~14 miles) and I started feeling worse and worse. Just pretty much limped home (drive) and called it a day.

On the following Monday, Ben and I went out to ski Mt. Toll. More of the same, really. It was quite warm but I was really, really slow. I didn’t even make it up to the top. By the time we actually were skiing, I felt like hammered crap and was again nauseated and just spent. Oh well. It was a gorgeous day, in any event, so that was nice. Ben and I were a bit late and the snow had turned to mush by the time we were skiing but it was a lot of fun. Feeling like ass aside.

So post that adventure, I made the decision to take a couple of weeks completely off. I will allow myself to hike a little, maybe play some golf. That’s it. One week down now and another to go (at least). I think I am just mega fatigued from this Spring’s events. Whatchagonnnado? 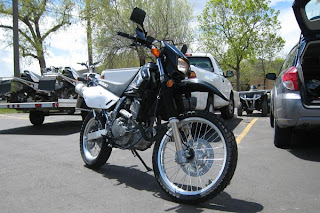 In other news, I bought a new motorcycle. So far, I really like it a lot. It is a DR650 and is geared for dual-sport riding. I am going to set it up for dirt adventures and have found thus far for the bike to be quiet, smooth and light. Certainly compared to the Beemer I sold in April.

I also have watched a few good flicks of late. Iron Man was quite good as was American Gangster. We watched Long Way Round again which is really entertaining. I recommend all three. Go see Iron Man in the theater. It has incredible special effects and Robert Downey Jr. is great (as usual).

Other than that, just laying low, getting some work done, and resting. Good times. 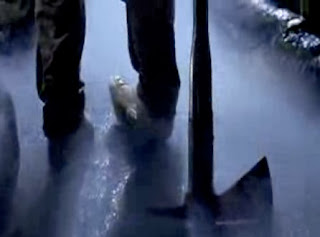 Rach’s mental image of how my feet must feel.

So thanks to Rach, I am recovering nicely. She has just been an absolute life saver – going to town with care, food and massage. Apparently, I am even polite in my sleep as she gave my poor toes some TLC last night while I was sleeping. I don’t remember any of this as I was in a coma but I guess I thanked her, which is pretty funny. She rules.

I slept for a solid 14 hours and am actually feeling pretty well this morning. My feet seem to have taken the brunt of the trauma (go figure) and several of my toes look like those lame little sausages you get at even lamer dinner parties. I appear to have not lost any appreciable amount of weight (which is a good sign) but feel skinnier somehow. Not sure exactly how that works but there you have it.

The outside of my right foot was incredibly bruised yesterday but this seems to have subsided (or at least spread) to the point where it is less noticeable. The one area that is amazing is on my right shin. Yesterday there was a small bruise forming here which has now spread to be about the size of a pancake if one were to wrap that around my leg. The body is an interesting beast. I suffered no outward trauma to this area but the internal damage has manifested itself as exterior evidence. I sense an ice bath coming in the not-too-distant future.

Movie review:
So I can’t say for certain but if you have just gotten home from running roughly 3 consecutive marathons, Aqua Teen Hunger Force Colon Movie Film For Theaters may be the very best movie ever made. But don’t quote me on that.

One of these days I gotta get myself organizized. ~ Travis Bickle

Busy with work stuff but staying rested. This is a good thing. With a little over a week to go before the big event, I am feeling great. Just trying to rest up as much as possible, get organized, make some last minute preparations and whatnot. Dan sent me some great documents to look at to help get everyone stoked. I am getting more and more excited every day. Probably should try to tone that down a notch.

Last night I just went for a short hike behind our house. As I headed up the hill, I saw our neighbors, Joe and Steph and their twin critters walking up ahead so I caught up and hiked with them for a bit. Their boys are about 1 and a half and are just adorable. Little blonde monkeys.

I am still on the same basic plan: Eat well, get lots of sleep, keep things moving but not in a way that creates any stress or fatigue, and wait. Lots of wait. Just over a week now. Getting very close.