I’ve got some of this Mendocino Rocket Fuel, that’s supposed to be really… ~ Viv Savage

Several weeks ago, I had the pleasure of sitting down with Charles Corfield – LT100 3rd place finisher, Everest summiter, and all-around great guy. Charles took the time out of his busy schedule (I get the impression that he runs at 4 in the morning every day) to meet with me to discuss some ultra tips and tricks, his experience running and his famous Rocket Fuel mix.

Charles placed third at the 2007 Leadville Trail 100 race after being talked into running it by some friends. He had no real intention of running the LT100 and so just jumped into the fray and treated it like running two consecutive 50s. Apparently that worked pretty well as he finished without a crew or pacers in 19 hours 42 minutes. Solid effort.

During the course of our conversation, I learned a lot about how to approach racing, training, hydration and nutrition and discovered that Charles really thinks things through, does extensive research and, perhaps most importantly, experiments to find out what works. He is practical as well, often offering simple solutions to common problems vs. recommending expensive or cumbersome alternatives. He asks questions and then thoughtfully presents solutions. For example, when he inquired about my ’07 LT100 attempt and what, in my opinion, went wrong, I mentioned that blisters were an early issue that then escalated to other, larger problems. His solution: Superglue a sock into my shoes to work as a gaiter and superglue the tongue to the upper to keep dirt and grit out. Not particularly elegant but cost-effective, light, and efficient.

One item I really wanted to discuss was his hydration and nutrition regimen. Charles is very scientific about his nutrition needs and calculates exactly what he will need during any given race (or training event) to be sure that he is able to consume the right amount of fuel during the event. This keeps him from getting bogged down by too many calories or bonking from too few. Charles relies primarily (in fact, exclusively, I believe) on a mixture of amylopectin (Waxy Maize) and maltodextrin which has found the name “Rocket Fuel”. I started experimenting with the mix in January this year to see if the solution worked for me and I have found, thus far, for it to be a great supplement to, if not replacement for, my “normal” on-trail nutrition. Here is the formula for 3000kCals (~750g of solids):

During my initial experiments, I was mixing about 3 Tablespoons in a bottle of water. Though this worked well, it was not concentrated enough to work as a stand-alone fuel source. I checked with Charles and he indicated that he mixes his to produce a fairly thick, gel-like consistency that then can be delivered via a fuel bottle vs. in a more “drinkable” form. I subsequently tried this as well and it definitely is the way to go.

During the Moab Red Hot 50K, I used Rocket Fuel from the start. I did make the mistake of mixing it a bit too thickly and this, coupled with very low temperatures, made the fuel a bit tough to work with during the race. I should have added water on the go, but in my hydration depleted state didn’t think of that. So really, had I been smarter about it, I know that the mix would have worked even better for me than it already did. 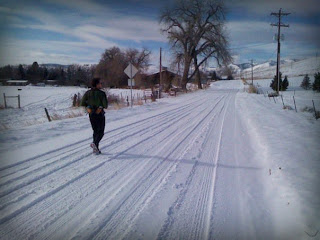 Security is mostly a superstition; it does not exist in nature. Life is either a daring adventure or nothing. ~ Helen Keller

Yesterday’s skiing turned into a movie due to single-digit temps coupled with 40+ mph winds and a desire to keep Dad and Donna from freezing their tuchuses off so we went to a movie instead. Invictus, though somewhat charming (thanks mostly to Morgan Freeman’s portrayal of Nelson Mandela), was entertaining at best. The secret service/bodyguard sub-plot felt really tacked on and Eastwood has handled shooting more adeptly in other efforts (which is saying a lot, considering I am not really a fan of his work). However, Dad and Donna enjoyed themselves so mission accomplished. Sometimes you have to take one for the team.

So I mixed things up even more by moving my Long, Slow Day to Saturday this week so that I could run with a buddy of mine with whom I am hoping to do a lot of adventure running this spring and summer. We have a few grandiose plans (including the John Muir Trail, the Kokopelli Trail and a full assault of the Colorado Trail in ’11) and he is actually starting to get excited about another attempt at the LT100 this summer. So that means I may have some company along the first half of the event but am down one pacer if he decides to go for it. One takes the good with the bad (and I kid… I’d love for him to give it another shot). So I headed down to Boulder amid flurries, gray skies and cold temps to get a long run on.

We met at Sean’s place then drove out to the Boulder Res to run on the Boulder Backroads course. This is a notoriously difficult marathon course spiced up this morning by snow-covered and icy roads. Relatively fresh snow, to boot, so while it did provide some relief from the pounding one can be handed by frozen pavement and hardpacked conditions, it married this to sloppy footing and loss of traction to which I am becoming accustomed. This was not going to be a record-setting pace day, however.

We had the benefit of a crew today in the form of Sean’s father-in-law, Dave, who graciously not only drove us to the start/finish but placed drop bags along the route so we could resupply water and other goodies, loaned me his YakTrax (which I didn’t end up needing but were good to have along) and hung around after his shorter run to drive us back to Sean’s. Dave rules!

Overall, I felt pretty great and we managed to keep an average pace in the low 9s despite the conditions. The weather even broke for us within a few miles of our start and it ended up being a gorgeous day. No wind, sun shining… good stuff. We were shooting for 20 miles but mis-estimated the turn around spot on the out-and-back section of the course and ended the day with 21.5. Some minor aches and pains in the last couple of miles but those were to be expected given the poor footing we experienced throughout the run.

I am testing a couple of recovery techniques and will let you know how they work. Added full-leg compression stockings to the immediate post-run regimen and took an ice bath when I got home. I know this isn’t ideal (should tee that up immediately post-run) but thought I’d see if it appeared to have any positive effect when delayed. I tossed the stockings back on after the bath as well so now am I not only super sexy but well… I don’t really know how to finish that sentence.

Rach filled me full of amazing curry she just made up from whatever we had in the house and now I am feeling quite sated. Great Boxing Day for sure.