An upslope storm rolled in last night and dumped about 18″ of fresh stuff on the Casa del Critters. Standard operating procedure for the Front Range this time of year. What is significantly less standard is my “meh” reaction to the whole thing. Typically, I would be standing in a line with a thousand other yahoos waiting for the lifts to start churning. This year, not so much.

Lots of factors contribute to my blah reaction to what would normally be unbridled enthusiasm for blower pow conditions. The death of my friend, Jonny Copp, in an avalanche last Spring certainly isn’t getting me overly thrilled to go out and tackle the backcountry and the shitty snow conditions we have experienced all year aren’t helping either. I tend to get into patterns of behavior and if things don’t line up, I move on.

I am a bit bummed that I bought passes again this year that have remained virtually unused. And I think my bummed-ness comes less from the money I spent on the passes than from the loss of enthusiasm for something I once cherished. I have been trying to look at it all from a more Zen perspective (with mixed results). Over the past 10 years or so, I have racked up an average of about 60 days per year. So over the long haul, I have gotten my money’s worth. I think that the overall change in attitude has to do with the quality of running I am experiencing this year. All season I have been telling myself that I would rather go for a good run than a mediocre ski and now, well… I think that I would rather go for a good run than a good ski.

Perhaps next year things will change. If the East Wall at the Basin will ever open up, maybe my attitude about skiing this year will come around. But I really only look at that as a way to cross-train for running. Apparently, I now have a no-track mind.

That’s what she said. ~ Michael Scott

Here’s some video Pete shot of me in the Grandads at A-Basin. This looked a lot bigger from above. 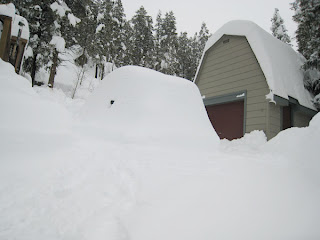 That pile is Rach’s car.

Yesterday was pretty sweet. Pete and I met fairly early at Kermit’s to get in some pow turns at A-Basin. Turns out we were ahead of the major cluster that eventually closed I-70 but a little behind on the first chair action. That was okay, however as we still got in many hours of great skiing. AND managed to make it home without getting stranded (though it did take Pete 6 hours or so).

So the conditions were prime after 16 inches of snow overnight and more consistently throughout the day. It was seriously puking snow up at the Basin and the locals were out in force. Even Gary made the scene after suffering some sort of back injury that kept him out most of the year. Pete and I rallied on Pali all day in search of the goods and fun stuff to drop. The wind was doing its weird wind thing (out of the Northeast again for some reason) which made seeking the best snow a little more of a challenge (it usually loads up with winds out of the West) but we managed just fine. Pete worked on sticking the drop off Mini Kong and I finally stomped Little Grandad. Sweet!

The drive home was slow going and Pete’s car was seriously buried by the time we got back to Kermit’s. Once I got home, I was greeted with a couple feet of snow in the driveway (and a rather large pile of munge from the plows). I had mowed the driveway prior to heading up in the morning so this was all accumulation during the day. I mowed again (while it dropped at least 4 inches an hour) then once more before bed. We also lost power, which was pretty awesome but the best was the jackassery that went down during the course of the evening.

Since we had no power, entertainment became watching people try to deal with the heavy snowfall. First, some guy drove down the road, backed up WAY back up the road, then came back down and for some inexplicable reason tried to do a 30 point turn-around in front of our house only to get stuck in our driveway as his truck died. Apparently there was some marital tension going on as well and I think that at one point keys were tossed into the snow bank but I am not certain. In any event, they finally got the truck rolling again only to reappear two hours later in a different car, which they stuffed into the snowbank at the edge of our driveway, did another 13-point turn around and went on their merry way. There were also many snowmobilers racing up and down our road which always is good for a laugh.

So our power came back on about 10:45 then we went to bed. When I got up, the road crew had deposited a pile of snow and road munge 4 feet tall at the end of our driveway. Disappointed. I spent much of the morning getting that moved out of the way then the rest of the day getting the truck out and able to roll. All in all, we got over 3 feet in about 36 hours and it is still snowing lightly as I write this. Springtime in the Rockies… gotta love it.