You get your ass out there and you find that fucking dog. ~ Billy Madison

Rach is covering the House Rabbit Society this week while her co-manager, Nancy, is visiting Maine so I am flying solo for the week. Just me and the critters up here at the casa – and quite a few less critters than normal. Rach took down all the critical care guys so the house feels a little empty. I have moved my motorcycle, ski and bike collection in to fill the void and get a little Spring tune-up action going so that is filling the now-empty space. (I kid, I kid.)

On the running front, I am still at it though with ill-definined goals currently. I took Tuesday off to rest and went to see Star Trek, which was entertaining. JJ needs to relax a bit on the lens flairs but it featured an entertaining story, capable acting and good action with just a fine schmear of cheese. And what would Trek be without some cheese?

I ran short on Wednesday and did some surges which got me a couple of thumbs up from passing motorists on the Beav’. I felt great, actually and was able to keep my form solid throughout my run, which is precisely what we are after. So mission accomplished. Short, meet sweet.

Thursday got away from me a little bit with some work wackiness then a quest to find Rach a new headset so that she can actually get some work done while fielding calls at the shelter. I then went to see Sandy to get a little work done on my never-en ading ab problem and by the time I got home, my desire to run had wained quite a bit. I finally levered myself off the couch and just said, “Man, get your ass in gear and go run.” And I listened! Go figure. Usually I buck authority.

The first half of the run was decidedly unpleasant. My poor attitude was coupled with really not feeling well at all. It was late (I didn’t start until after 7p) and I had wacked down some ill-advised snacks just prior to the run. Plus I was feeling a bit exhausted in general. So I ran/walked up a trail near my house with the ultimate goal of reaching Golden Gate Canyon State Park. Clunkiness continued for about 2.5 miles until I started to feel it. The second half of the run went really well and I turned on the heat to finish up with a total time of 1:04 and 6.5 miles – all on dirt and technical trails. I think this is actually as fast as I have ever done this loop so all’s well that end’s well. The lesson learned is “get off your couch, jackass… you might be missing your best run ever!” (Not that this was my best run ever per se, but it could have been and I could have missed it, jeez.)

So I am off again today and have to roll down to Boulder for a meeting. I may try to catch another movie… not sure. Tomorrow is the big race that I am not doing (ugh). I am going to volunteer at Aid Station 3 so say “hi” as you run by or just come out to watch everyone else running the Dirty 30. Sunday I volunteer at the shelter and then am shooting some video for the shelter then am going to figure out how to work in an 11-miler. May turn into my first night run of the season. We’ll see.

On a less awesome note, I ask everyone to employ their good juju and point it toward the mountains of China for a bit. My buddy, Jonny Copp and two climbing partners are past due returning from a first ascent attempt of Dojitsenga, a 5,700-meter peak in the Kangri Garpo range. They are currently at least two days late. This is not really something new for J to the C but any good thoughts you might send his way couldn’t hurt. Read more about it.

As always, I’ll keep you posted.

I have misplaced my pants. ~ Homer Simpson 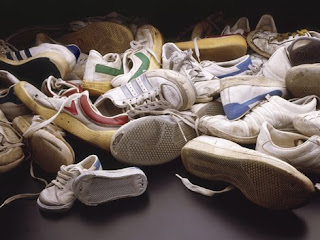 How Barefoot Runners Are Shaping the Shoe Industry

These guys at school… smoke. ~ Gavin

How did that happen? Another week just whoosh… in the past.

Not too shabby. I generally stayed on schedule this week with a couple of runs being just shy of planned. Overall, I am feeling pretty well and am not getting burned out. I am a bit concerned about what happens when the snow starts flying but we’ll just play that by ear and not worry about it before it happens (which it will). Last night it snowed down to about 10000 feet so it is definitely on the way.

I also tried out a new pair of shoes today: the Pearl Izumi Surge

. It is always a bit iffy trying out new shoes but Saucony no longer makes the ones I prefer (and they are much more of a trail shoe anyway) so I thought I’d give the Surges a shot — particularly since I am doing the road thing for the coming months. First impressions are positive. They are definitely lighter than what I normally use and felt stable and fast on the road. I was planning to use them for tomorrow’s run but decided that was a bad idea to jump into a fresh pair of shoes for a long-ish run. If these keep working well for me, I’ll probably pick up another pair for use during the event as well. That is the plan, at least. I’ll keep you posted. So far, I like them.

Tomorrow, I have a 17-ish miler planned for down in the valley. May turn this up a notch to 22 and run with Caleb. I’ll let you know.

It is amazing how intolerant of heat I am. Yesterday, I was in Boulder and my run got delayed until around noon. It definitely wasn’t what I would consider “hot” down there but I suffered a bit nonetheless. Maybe I had just prepared myself for an easier time but my heartrate was through the roof all day. I must admit, I was having a hard time not running too fast (which contributed for sure) but my heartrate in general was just a lot higher than normal.

This could all be attributed to lots of different issues – from base fatigue to the physiology of how one’s body keeps cool. I am guessing it is a combination of factors. My sleep patterns have been a bit screwed up of late (getting to bed a lot later than normal) and I have been training more consistently as well. I am sure both these have contributed to my current state (which isn’t bad, mind you). Those items, coupled with my heart having to work harder to push blood closer to the surface of my skin in order to cool me off in warmer temps is probably what did it.

In any event, I had a fairly hectic morning then finally got out for an 8-mile loop around central Boulder. I am able to maintain increased speeds on flat roads (which is nice) and aside from the overheating, felt okay. My legs were turning over well and so I worked on form and then did some strides at the end. All in all, a pretty good run.

On Sunday, I did a 13-mile loop up by my place and tried to keep a steady pace of 8:45-9:30 pacing. I spun the loop in just under 2-hours, which is averaging about 9-minute miles. This was supposed to be an aerobic endeavor but trying to keep that steady pace up hills at altitude definitely pushed me up into “going too hard” territory on a few occasions. I may just switch to heartrate training or something to ensure that I don’t overdo it.

Tomorrow, I have a 10-miler scheduled and will be down in Boulder again. Might jump on some trails down there just for kicks or run their awesome network of bike paths. I’ll try to get out earlier this time so as to not get stuck in the heat. Anyone up for a run?

The first fall of snow is not just an event, it is a magical event. ~ J.B. Priestley

Snow! Not at my house but damned close. I thought we had a good shot at getting some here but it didn’t happen (since we have lived up in the hills, the only month during which it hasn’t snowed once at our place is August).

I decided to head down to the rec center to run on the treadmill and swim. This, apparently, was enough to get the clouds to lift and the sun to come out. So had I waited an hour or so, I could have had a pleasant run outside. In any event, I got in a good treadmill run, felt great, sunk swam for a bit and was treated to spectacular views of the snowcapped peaks near our house upon finishing up. Good times!

So for my run I did 1 mile warm-up at a 10-minute pace, then another mile at a 4-hour marathon pace (9-minute miles) then 2 miles at a 3:30 marathon pace (7:57-minute miles) then stepped it up for the last hard mile at a 3-hour marathon pace. Then I warmed down for a mile back at 10-minute pace. Interestingly, I was able to keep my heartrate in the 140s at the 4-hour pace and it only jumped up a little at the 3:30. Forget about the 3-hour mark. I would have a lot of work to do to be able to sustain that pace for more than a few miles. And keep in mind this is all on a treadmill, which doesn’t really count.

Then I swam for about 15 minutes. Which was plenty. I am less than efficient in the pool.

So send your thoughts out to the poor bastards doing the Leadville 100 today. I am guessing it is pretty ugly up there.