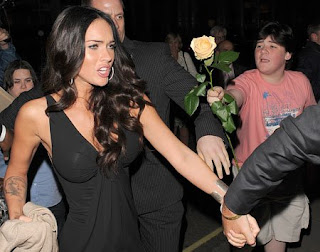 …aside from the demons in my head of course. I am not a proponent of cold-turkey in any of its forms (particularly, well… the turkey one) but I must say that running practically daily for 4 months straight then stopping on a dime may not be the best plan for everybody. And by “everybody”, I mean “me” since I am so awesome, I might as well be everybody (except for that Megan Fox rose kid, he’s got way more game than me).

Anyway, I think that immediate cessation of virtually any activity, Dungeons and Dragons aside, is bad for one’s mental state and mine has definitely suffered of late. Pretty much everything either bums me out or pisses me off these days resulting in several soggy, dented ponies and one seriously f’d up Care Bear display. But I am augmenting my lack of running with copious amounts of research on how to be even more awesome once I get back out there. So it’s all good.

In any event, lot’s of good stuff going on including a two-peat at Western States by Hal Koerner and a very impressive domination of the women’s field by Colorado’s own Anita Ortiz who came in 9th OVERALL. There was some ass, and she apparently felt obliged to kick it. Congratulations are in order to all finishers and participants who endured Stu-melting heat on a bad-ass course. Not sure if the WS100 will ever be on my agenda but they put on a helluva race and provide some cool site features to let couch-surfers everywhere join in the fun. Where the WS100 site fell short, near constant tweets picked up the slack. Gotta love technology. Except for this laptop which is currently searing my thighs.

So in the meantime, I have been riding my bike, watching movies (Up is good. Doubt was as well. Paranoid Park, not so much.), and chasing down new business leads. I also need to give a special shout out to Dr. Stephen Paul of Boulder Orthopedics. He has helped me out numerous times and is well-acquainted with the inside of my right knee. I had an appointment scheduled with him next Monday and he called me today to let me know that I would be better served seeing one of his partners for my injury vs. seeing him and then followed up by distributing my MRI results for her review and having her nurse call to set up an appointment for me. Gotta love that patient care. If you don’t have an orthopedic injury in need of treatment, I recommend jumping off a roof or something in order to have a reason to go see him.

Now leave me alone, I have to go glare at a kitten.

Well tomorrow it’s on – The 2009 Western States 100. Last year the event was canceled due to fires in the area and this year some big guns are back in the mix including 7 start 7-win and current course record-holder, Scott Jurek. Scott is a fellow vegan so I’ll probably be pulling for him to throw down another exciting win. Apparently Tony Krupicka isn’t going to make it this year due to injuries. Last year, he was all teed up to go for the record then suffered a season-ending injury shortly thereafter.

Read Buzz Burrell’s take on the action. And follow the race live.